The Maya solar of Yucatán, in southeast Mexico, has historically supported an intricate indigenous system of land, livelihoods and identities. It remains the basic habitat unit in the region as a vital space for the continuous development of everyday activities (social, economic, cultural, and environmental). These everyday activities contribute towards the cohesion of the family unit and the community through preservation, enrichment and diffusion of knowledge shaping individual and social identities, allowing for the survival of their way of life. Moreover, it is in this place where people organise their self-provision in a series of spaces (e.g. kitchen, barn, and henhouse) connecting their livelihoods to the surrounding land. The solar has been produced and shaped in relation to the region’s specific environmental conditions.

What is the solar?

The traditional Maya solar (Figure 1) comprises of the

Cultivation and husbandry within the solar covers the subsistence needs of the family, balancing production in the slash-and-burn agriculture system which relies on polyculture, known as milpa, usually practiced in ejido land, a commonly held property in Mexico. The solar not only provides food but also material construction, utensils and forage for domestic animals. It also allowed for the storage of surplus enabling crops and animals’ commerce. Here, family management ensure the continuity of different practices and activities that shape the configuration of the settlements and its surroundings (Aké Gómez et al., 1999; Jiménez-Osornio et al., 1999; Correa Navarro, 1997; Vara Morán, 1995). 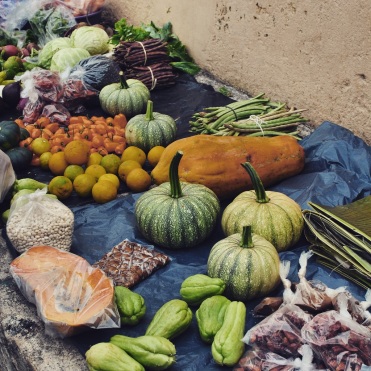 Historical connection of the environment with housing

The Maya civilisation of the northern lowlands, where the current state of Yucatán is located, were and still have, limited water and cultivable lands. This limit and the local characteristics of soil, water, and weather were decisive in developing the itinerant extensive agricultural system – namely slash-and-burn (roza-tumba-quema). Several intensive agricultural production systems were designed to complement the milpa system, such as the home garden (or solar) where polyculture was also practiced (García de Miguel, 2000; Farriss, 1978).

Spanish colonisation subjected the Maya and their ways of living to violent transformations between 1542 and 1821, altering the solar and the relations of Maya people with their environment. During this time, scattered Maya villages were depopulated – through the violent destruction of houses and their means of subsistence – which led to disintegrating extended families, and grouping indigenous people into Indian Congregations for efficient control in smaller spaces. These actions ensured that their land became available for settlers (Terán and Rasmussen, 2009; Sullivan, 1996; Farriss, 1978). As soon as colonial control declined, Maya populations gradually dispersed back into their pattern of scattered settlements, especially towards the east side of the Peninsula. This dispersed organisation enabled better subsistence strategies. Survival strategies of the Maya during colonial times included extended families living in solares where sustaining livelihood strategies were developed based on diversification: activities away from the solar were generally carried out by male members of the family while solar activities were female based (Peniche Rivero, 2003). In-plot (or solar) activities included growing the orchard, keeping pigs and poultry and weaving. Cattle was mostly used for cash and was only consumed during emergency crop failure. This was supplemented by wild fruits such as breadnut fruits, and root vegetables. All these activities benefited the whole house-plot, including generating economic surplus (Restall, 1998; Farriss, 1978).

This relation of the Mayas and their environment and the configurations of their solar was once again altered pre-and post-independence in 1821. Haciendas, or land estates, were developed in the region based first on corn, sugar and forage, and later and more importantly on henequen (Agave fourcroydes) to produce raw fibres during the dictatorship of Porfirio Díaz (1876-1910). Henequen plantations required seven years before production, involved constant weeding, regular harvesting and quick processing before deterioration. Thus, a constant labour force was required. The control of the popular classes in haciendas was established through the debt peonage system, a form of slavery, but also by mechanisms of coercion and isolation mixed with paternalist incentives and security. Approximately 75% of all rural dwellers lived in haciendas and around 96% of all family leaders were landless (Joseph, 2003). One of the major land changes during this period, besides the plantations and the haciendas, was the transformation of housing patterns of the workers, from scattered wattle-and-daub housing shifted to clustered whitewashed masonry forming grid patterns extending outwards from the hacienda itself (Wells and Joseph, 1996).

With the triumph of the Mexican Revolution (1910-1920), land was redistributed to peasant and indigenous populations, especially between 1934 and 1940, under the administration of Lázaro Cárdenas. The legal entity of the ejido was developed borrowing its name from the Spanish term for the common land on the outskirts or exit of a village (Aboites, 1985). In the form of ejido, landless campesinos (peasants) received the right to perpetually benefit from the land as agricultural providers but not as a monetary resource, i.e. they could work the land, guard the forests or exploit other resources for their own and their communities benefit, but not use it for selling, renting or mortgaging. The fundamental identity of the ejido involved ‘a communal participatory form of governance; a livelihood strategy that is agrarian or forest-based; and an equitable distribution of resources’ (Barnes, 2009: 398). This land system permitted Maya people to work the milpa under a slash-and-burn once again and the development of solar activities which complemented each other, and with other activities such as the production of honey and handcrafts, and wage labour for extra money (Warman, 1985).

While some features of the Maya way of living were lost in their historical and ongoing struggles for maintaining their lands, livelihoods and identities, not all was lost. It is because of these processes of quiet rejection of imposed authorities that some ways that these spaces have endured 300 years of colonial domination and over 200 years of national governments.

How does the solar influence sustainable land management today?

In rural environments, the importance of the Maya solar in the everyday life with the development of livelihoods, its connection to the land and its relevance in constructing identities is quite evident (see Poot-Pool et al., 2005; Baños, 2002). Up until 2002, in the aftermath of Category 3 Hurricane Isidore which left 33,000 houses damaged or completely destroyed in Yucatán, having a Maya house surrounded by big trees and a white low stonewall was the usual sight in rural Yucatán. Afterwards, concrete cubes, known as pies de casa, became a usual sight when traveling throughout the region instead of the traditional vista of Maya houses in big solares. This pie de casa (basically, a room made of concrete blocks) was the post-emergency housing solution for Maya families. While some of them rebuilt their Maya houses with whatever little resources they had, possibly rejecting the imposed transition towards modernity and urbanisation, for most families it was impossible to turn back – their solar was now in order to get multiple rooms, meaning that they had less capacity to self-sustain their livelihoods and that one of their identity symbols, the Maya house, was near-erased from local landscapes.

Traditional Maya houses adapted to the environmental conditions from the region, including hurricanes and high temperatures, and its resistance to hurricane winds has been tested (see Angelotti Pasteur, 2014; and, Centeno Lara et al., 2005), giving room to its improvement. While the traditional palm roof provides relief to high temperatures this is not achieved in ‘pies de casa’, which puts an unnecessary stress on families’ income to keep their houses cool. Currently, people still live in Maya houses and solares, quietly facing the attempts of neoliberal governments to change their ways of life. 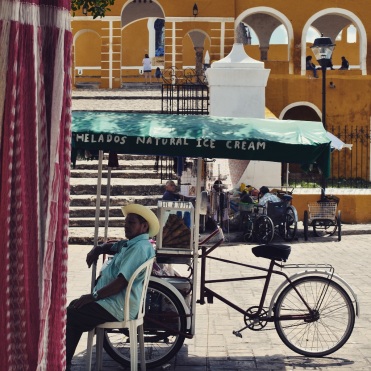 Throughout their history, Maya people have endured attempts by both colonial and national governments to make them ‘modern’ and ‘urban’. They are often perceived as ‘rural’ and ‘backward’ due to their connection to the land and living in a Maya house, which has been branded as lower class and perceived as a symbol of poverty, insalubrity and dysfunctionality (see Cabrera Pacheco, 2014). Ironically, the same rurality and backwardness are embraced and promoted as tourist attractions, whether they are conceived as part of new waves of eco and rural tourism or as belonging to the past through museums and archaeological sites.

The multiplicity of events occurring at once in the solar, draws from historical constructions and intertwining the three key concepts of land, livelihoods and identities. In Yucatán, the current dispossession of Maya lands, livelihoods and even identities is neither new nor recent but part of an ongoing struggle for survival experienced by Maya populations since colonial times. Using the Marxist theory of ‘Primitive Accumulation’, which offers an account of the origins of capitalism, and reworked it from both Decoloniality and Critical Geography perspectives, to historically trace these dispossession processes and locate them in the present moment. This innovative approach unravelled the key role of the Maya solar as a space for continuous resistance of Maya populations in the quiet processes of the everyday life.

Contemporary Maya territories in Yucatán are being transformed in complex and contradictory ways, resulting in spaces that are neither urban nor rural but something in between. These spaces are considered in neither local urban regulations nor regional theoretical developments. Applying the Decoloniality perspective, a new understanding of the peri-urban is developed. Peri-urban areas are not simply an interstitial space between the urban and the rural, but as ‘the urban beyond the city’, where indigenous spaces such as the solar are important for the development of livelihoods and the possibility of self-subsistence in non-rural environments.

Identities of Maya populations in Yucatán are the result of contradictory elements of representations and performances, related, on the one hand to state policies derived from what is known as Indigenismo, and, on the other hand, of constructions, related to Indigeneity practices emerging from populations themselves. Actual lived experiences are reproduced through everyday life experiences marked by these contradictory elements. These conflicting processes can be reconciled through the concept of ‘Decolonial Indigenous Geographies’. This concept helps us to understand how the solar takes a central role for the ongoing enabling of material and intangible elements for the reproduction of Maya identities.

Different ways of organising their solares are seen in Figures 4 and 5. Complex realities mark the everyday life of Maya populations. Conceiving the solar as a part of more than just rural environments enhances the possibilities of developing urban livelihoods in the peri-urban – hence bringing together indigenous ways of living still related to land, livelihoods and identities into the ‘modern’ dynamics of the urban. 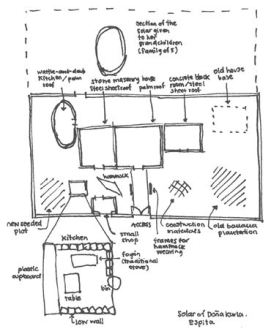 My research showed how there are spaces where both characteristics coexist within a settlement or even a household; in the realities of Maya people, they do not have to be or do, one or the other. For example, the ejidatarios who decided to divide only one portion of their ejido land while keeping the majority in common property, or the people receiving agriculture subsidies but overtly keeping their own traditional polyculture milpa away from mandatory pesticides. Additionally, there are people taking new housing given by the government while keeping, or rebuilding, their Maya house and their traditional kitchen next to it. They indeed upset traditional categories of identities, of being mestizo instead of being indigenous, but of being both at the same time, or being one or the other when the situation requires it. Moving forward, there are multiple ways that can be constructed for understanding complexities and contradictions in Maya peoples’ identities, in their own settlements, and even in their resistance in the quiet space of their everyday life, their solar.

About the Author: Dr Ana J. Cabrera Pacheco is a social scientist from Yucatán, Mexico. Her work includes Environmental and Social Sustainability, Human and Critical Geography, Indigenous studies, Urban and Rural studies, and Decolonial perspectives. She has a PhD in Geography from the University of Leeds. Her doctoral thesis was titled “The Maya Solar of Yucatán: Transformations of Land, Livelihoods and Identities in Peri-Urban Settlements in Mexico”, from which this texts comes from. She has worked as a coordinator for a consultancy on sustainability, and as research assistant on projects on urban inequalities. Her twitter is @anaj05.